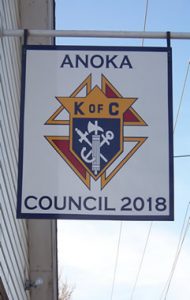 Anoka Knights of Columbus Council 2018, with an initial membership of 83, was chartered on May 2, 1920, by the Supreme Council in New Haven, Connecticut. The first meeting was gaveled to order by Grand Knight John Coleman at 8:30PM on May 17, 1920. The first three meetings were held at the Independent Order of Odd Fellows Hall in Anoka at a cost of $5 per meeting. The members than signed a five year lease on McCauley Hall with several subsequent leases to follow.

In October, 1953, the members purchased the former Zion Lutheran Church site on 4th Avenue in Anoka and converted it into a multi-use facility for meetings and rentals. Many renovations and additions have been completed on the building since that time: the basement was dug to provide an area for bathrooms and Council chambers; a kitchen was added; and an addition was added on the south side to enlarge the space for rentals.

One of our biggest events is the Halloween Haunted House which is held at the Anoka County Fairgrounds every October. This event involves a huge number of volunteer hours and is a big part of the Halloween festivities in Anoka, The Halloween Capital of the World.

On July 1, 2019 the Anoka began the 2019-2020 council year with 381 members. We have a picture wall in our KC Hall of 79 Past Grand Knights. We are a very active council with a large membership to assist with many projects at the churches, in the community and with our fund raising and social events.

Slideshows with Music of Photos from the Past 100 years